When it comes to embeddable widgets, Twitter has a lot of options: timelines, tweets and buttons.

For instance, If you need to display a timeline on a website then use an embedded timeline. The same goes for tweets; if you want to display inline tweets, then display them using an embedded tweet.

If widgets aren’t enough, then you can always use Twitter’s REST API to build custom functionality.

Drupal has a bunch of contributed modules that make it easy to integrate Twitter into Drupal.

In this article, I’ll show you a few popular modules that can help you add embedded widgets and access Twitter’s API from within Drupal. 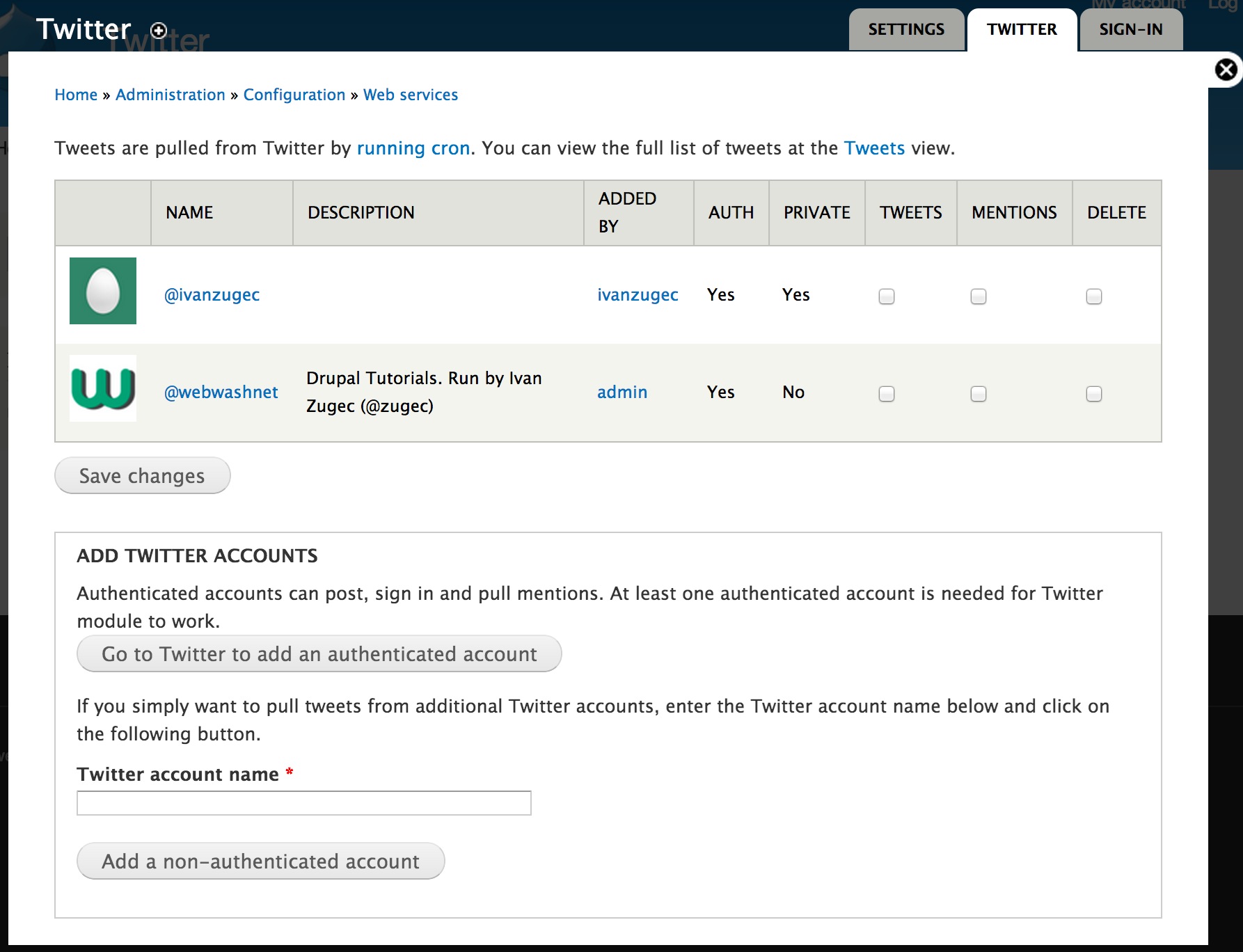 The Twitter Actions sub-module integrates Twitter with Trigger (core module) and Rules. This is useful for when you want to automate or send tweets on a specific event. 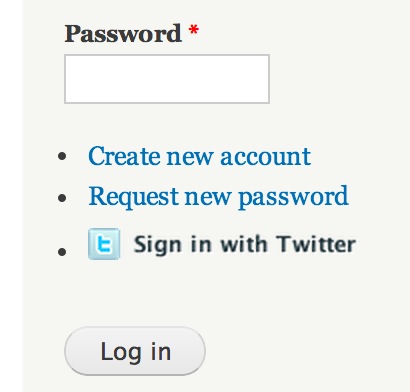 Now, if you need to build some custom integration with Twitter then I highly recommend these modules. Not only do you get all of the mentioned sub-modules, but you also get a simple API for posting tweets and more from any custom module.

The Twitter module gives you a lot, but you have to be aware that setting it up isn’t as simple as just installing it. Since Twitter changed their API over to version 1.1 all requests to the API have to be authenticated.

So to setup the module you need to create a Twitter application on dev.twitter.com and configure the module with [OAuth](Twitter to use the application.

Twitter Block allows you to add embedded timelines into any Drupal site using the Block system.

The module is useful for editors because it allows them to add timelines into any Drupal site using a simple interface. It saves them from copying and pasting HTML code, which can be problematic. 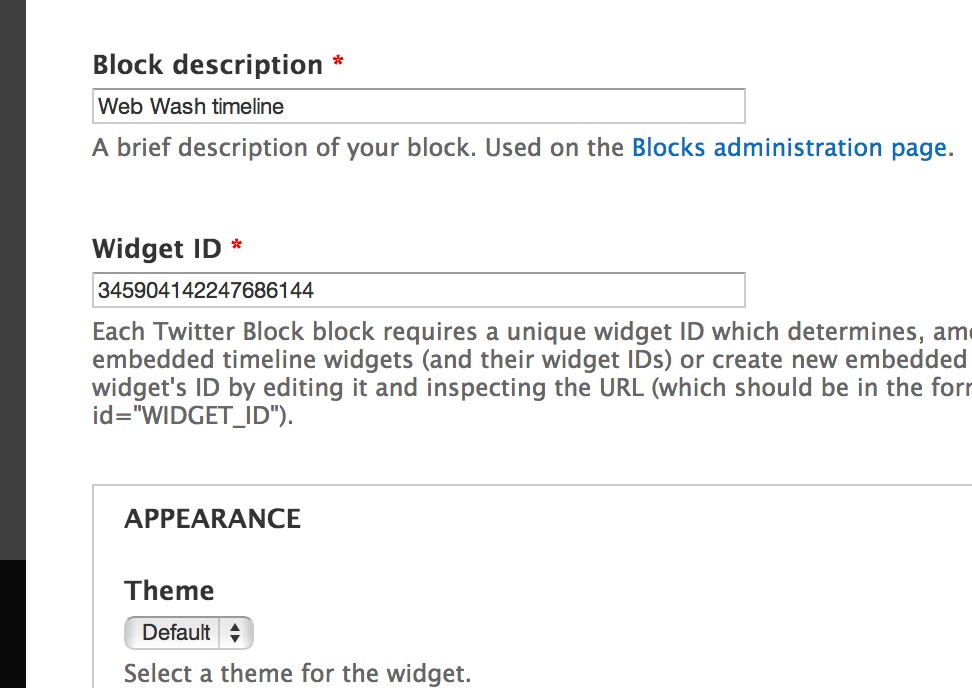 If you want to learn about Twitter Block, check out my in-depth tutorial called How to Display Tweets using Embedded Timelines in Drupal 7.

If you need to add Twitter cards to your Drupal site then take look at the “Metatag: Twitter Cards” sub-module that ships with Metatag. 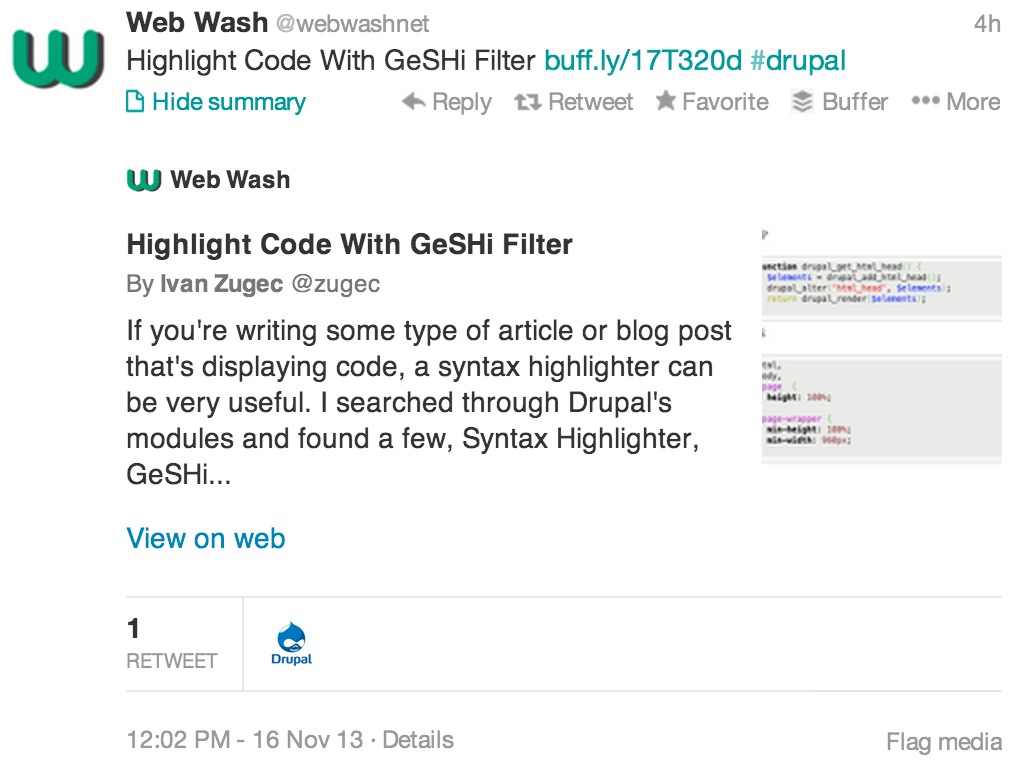 Adding Twitter cards support to a website is pretty easy because it’s all done via meta tags and for Drupal we have the Metatag module.

To learn how to setup Twitter cards in Drupal, check out my tutorial called Display Twitter Cards in Drupal Using Meta Tags Module.

I have not used the latest version of this module, but I want to add it to this list so people are aware of it. I’ve used the older version before and it worked brilliantly.

Last but not least, modules that add a “Tweet” button to a Drupal page are a dime a dozen. So I’m just going to give you a list of modules, I may miss a few, but here are the main ones:

If you’re looking for an easy way to add embedded widgets into a Drupal website, check and see if a module already exists. If you want to add Twitter cards, use Metatag sub-module instead of adding the meta tags manually. If you need to add a timeline, then use Twitter block instead of dealing with a chunk of HTML code.