While developing a module or modifying a template in Drupal you’ll often print variables, especially if you’re in a preprocess hook.

You learn early on how to use var_dump and print_r function. But these functions can sometimes display too much information and can be hard to filter through the arrays or methods in the variable.

In Drupal 7, with the Devel module, you could use the dpm or dsm function. When used, these functions will print variables at the top of the page or in the message area using Krumo.

Now in Drupal 8, Devel has adopted a new library to print variables and it’s called Kint. 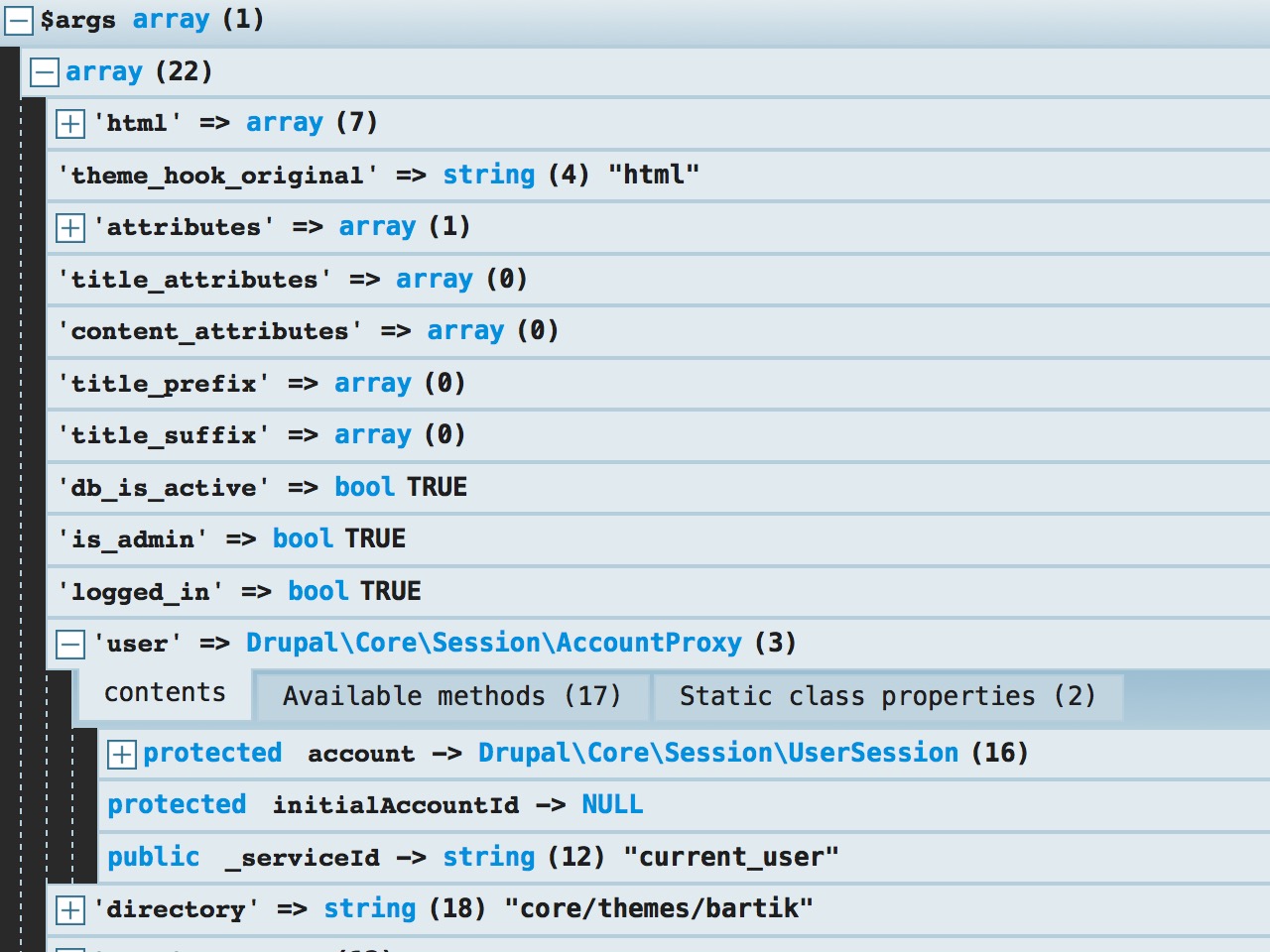 Please note, Krumo has been removed from the Drupal 8 version of Devel. The dpm and dsm functions are still there but the variables are printed without formatting. 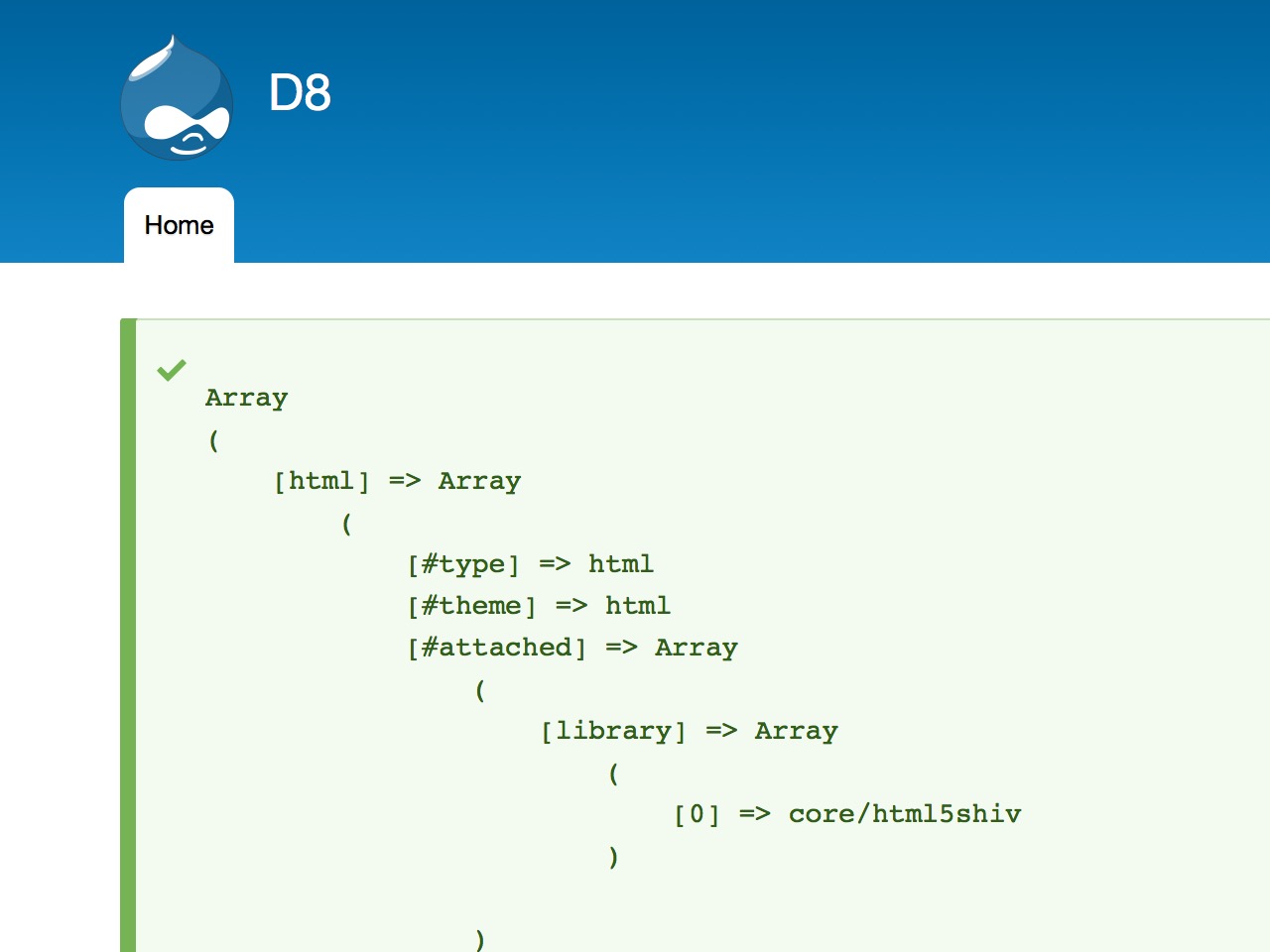 Kint ships as a sub-module in Devel and the library itself is also in the sub-module. So all you need to do is download and install it.

Below are the Drush and Drupal Console commands to download and install:

As mentioned earlier, Kint comes as a sub-module so it hasn’t replaced the good-old beloved dpm and dsm, these functions are still there.

Instead, you get two new ones: kint and ksm. 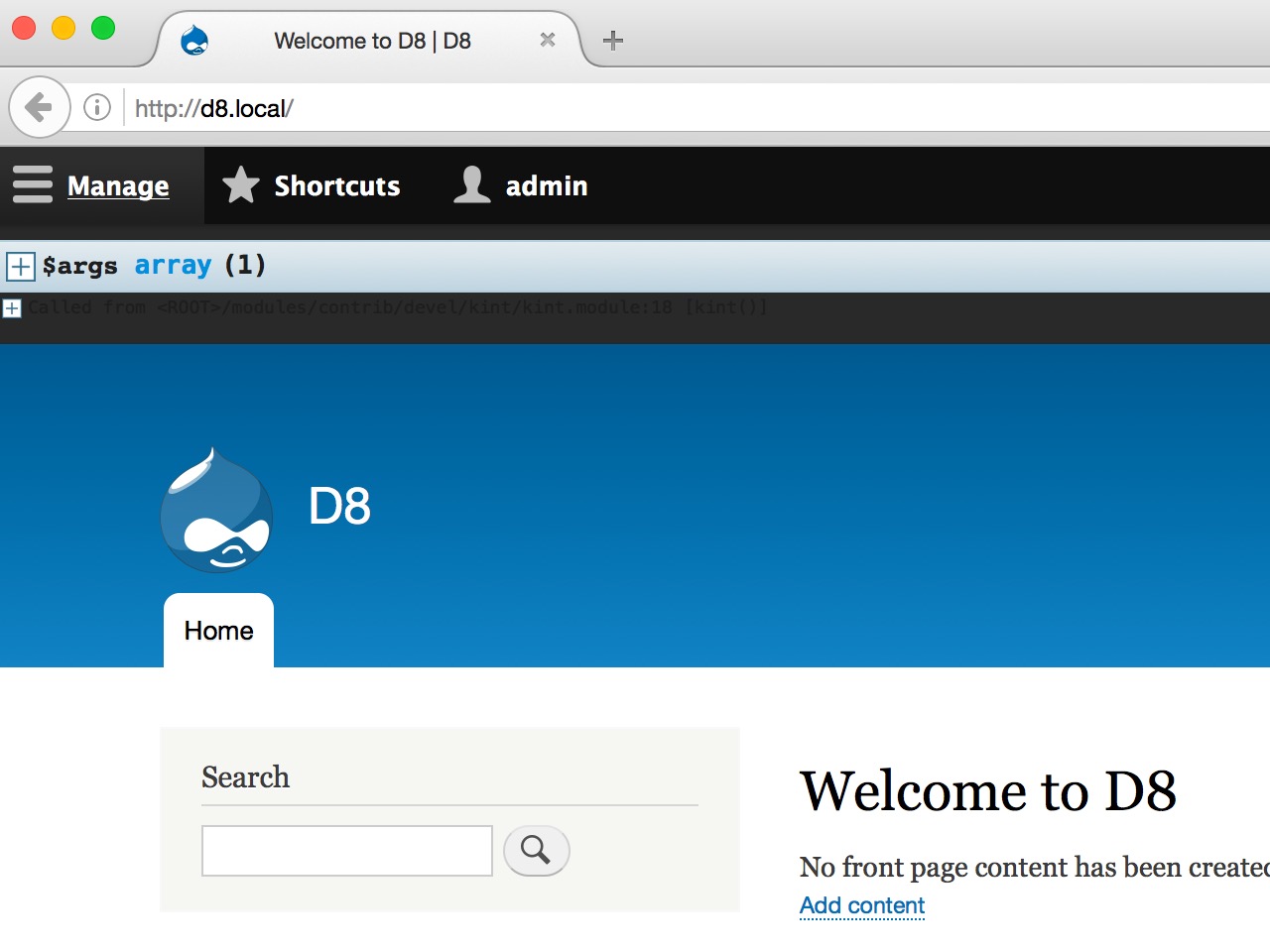 The kint function prints everything at the top of the page. 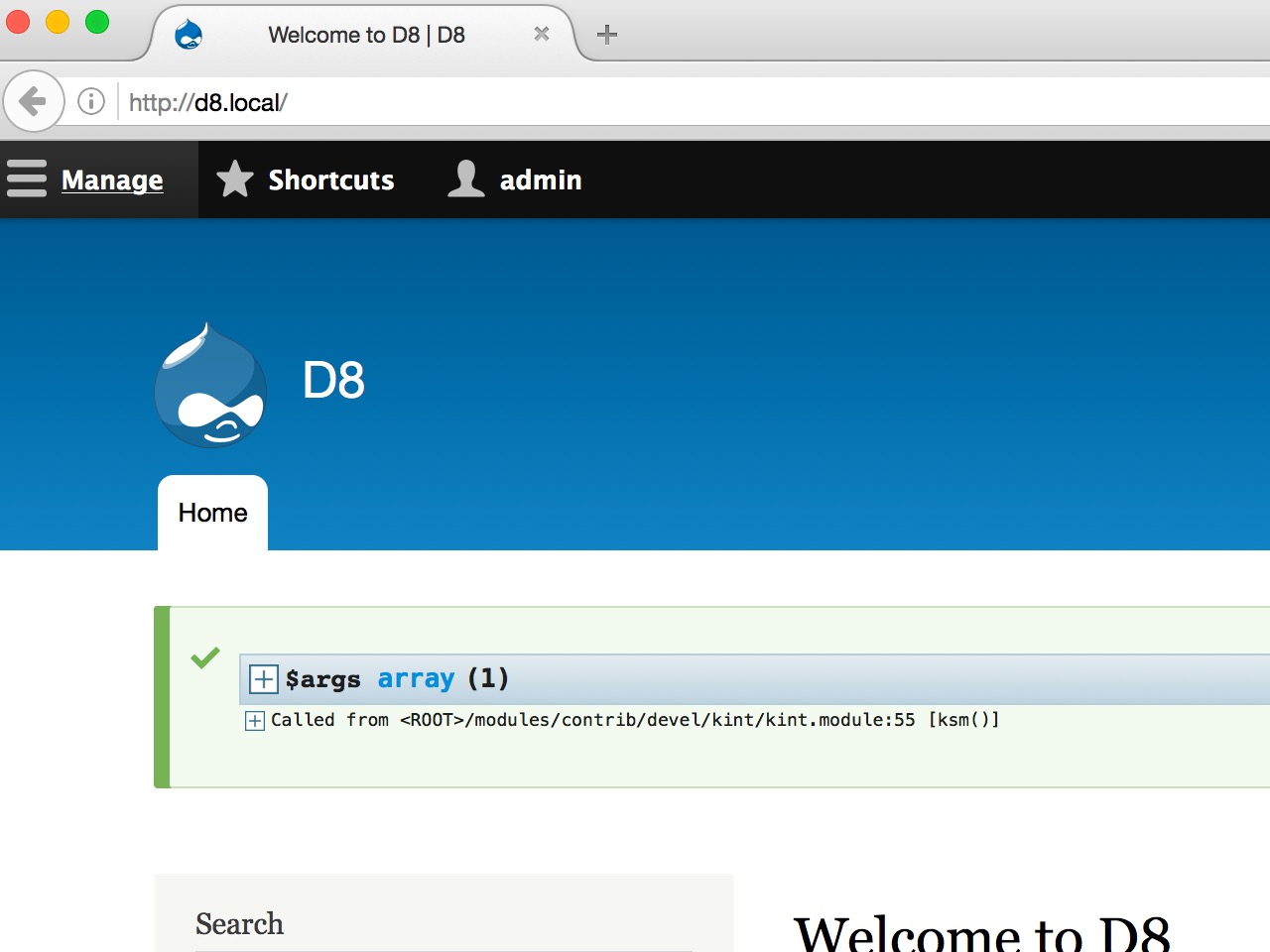 The ksm function prints the Kint output in the message region of your theme.

Once you have a variable printed on the screen you want to drill down and see what’s in it.

Kint allows you to navigate around in two ways. First, if you click anywhere on the row, it’ll expand just the next level.

But if you click on the + icon, it’ll expand all child items below.

Have a look at the GIF below to see how it works.

When viewing a printed variable, Kint also displays a stack trace just below the output. Click on the + icon below the variable and it’ll expand a stack trace. 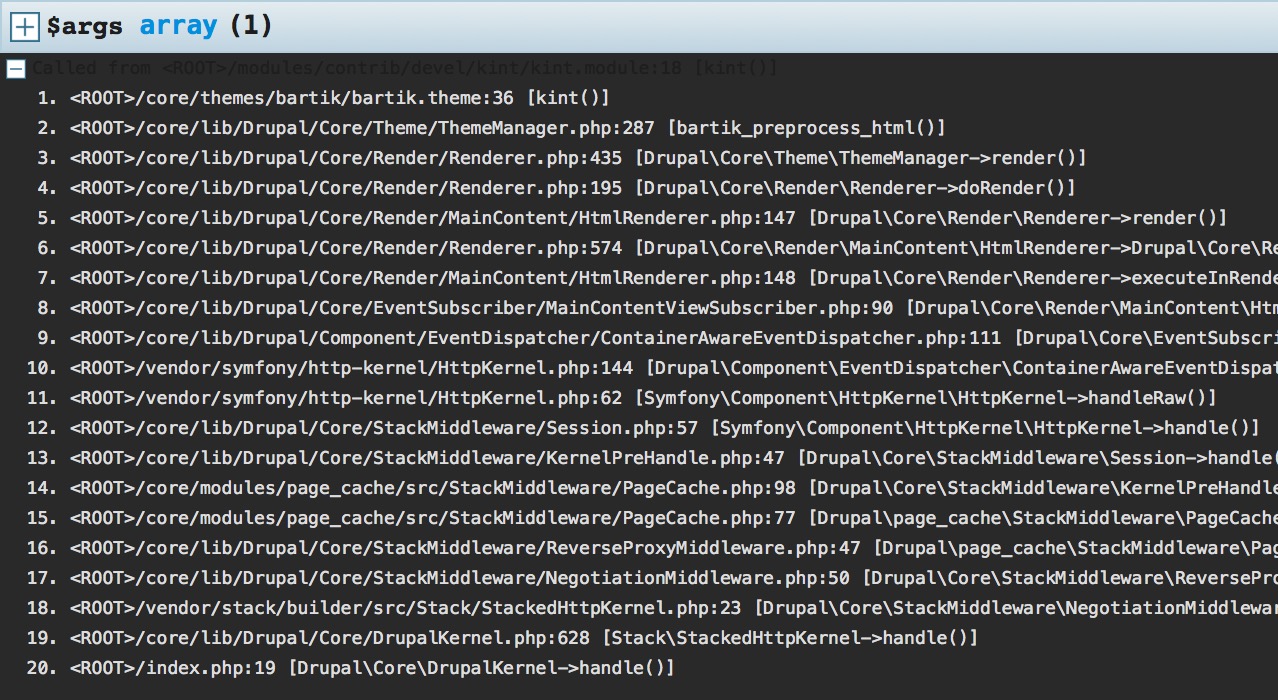 Kint can also be used in Twig templates. To print a variable, just add {{ kint() }} into the template and pass a variable in, for example, {{ kint(page) }}.

For this to work, you must turn on Twig debugging. I won’t cover it in this tutorial, but read this documentation page on drupal.org to learn how to do it.

If you’re using the 8.x-1.0-alpha1 version of Devel, then you’ll get a PHP warning when using Kint in a Twig template. This has been fixed in the latest dev version.

Kint is a good upgrade for the Devel module. The only drawback is you’ll have to retrain your muscle memory to type kint or ksm instead of the old functions.

No, these functions are still there but they won’t print the variable using Krumo as it has been removed from Devel in Drupal 8.

Q: I’m trying to print a variable in a Twig template and nothing is happening.

You must turn on Twig debugging for the {{ kint() }} function to render. Read this page on drupal.org to learn how.