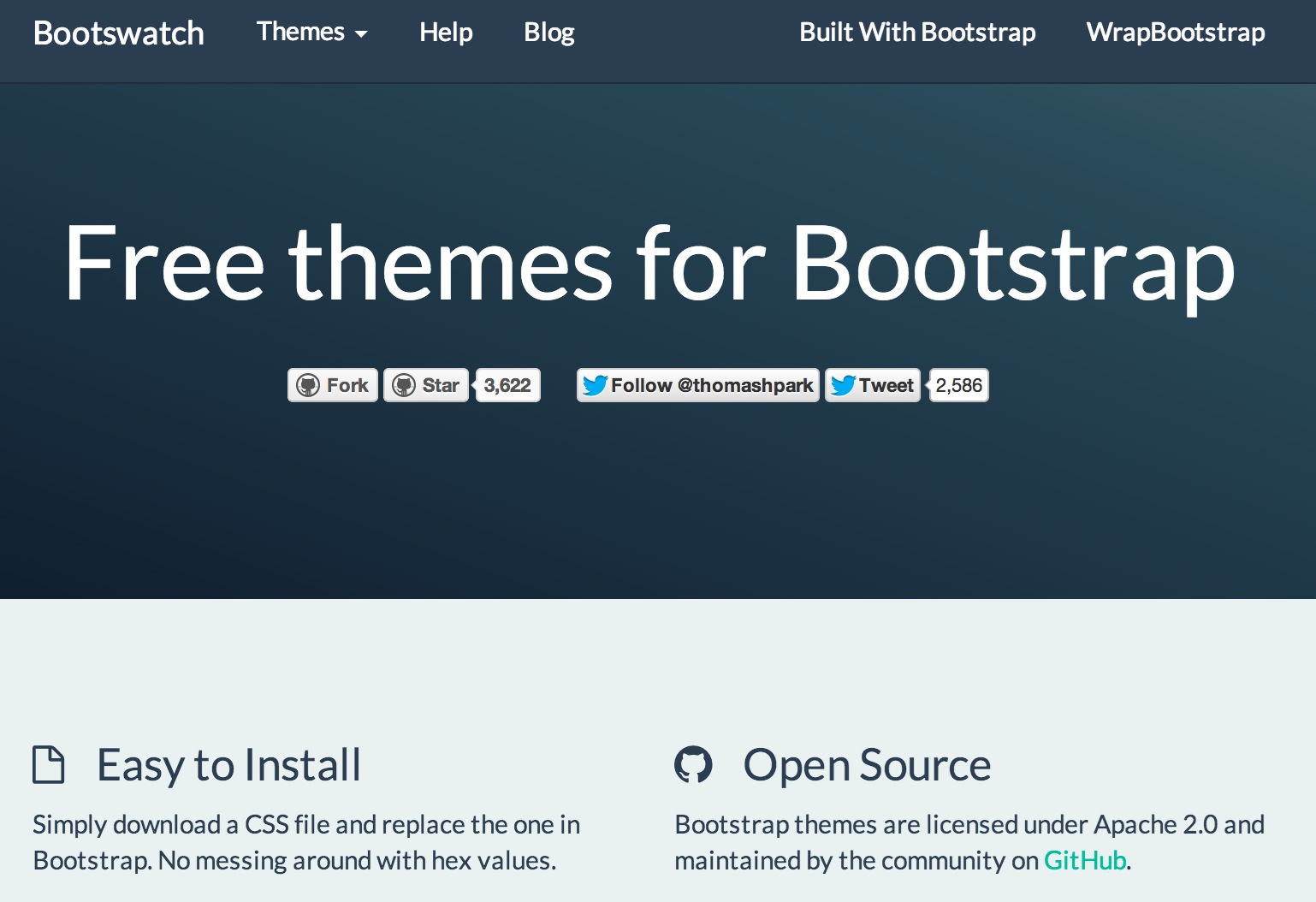 The standard look and feel of Bootstrap is unmistakable and often you can spot a website using it a mile away. The dead giveaways are the buttons and navigation, but it doesn’t have to be this way.

If you want to change the look and feel of your Bootstrap site then take a look at Bootswatch. It offers 12 great looking themes, and best of all they are free and open source.

In this tutorial, we’ll learn how to use a Bootswatch theme in two ways. The first method will show you how to use the BootstrapCDN and in the second we compile the LESS files ourselves.

Before we begin, head over to drupal.org and download the Bootstrap theme and jQuery Update.

If you use Drush, run the following command:

Once everything has been downloaded, go and enable jQuery Update and then go to Configuration, “jQuery update”. Change the version of jQuery to 1.7 and click on “Save configuration”. We need jQuery 1.7+ for the theme to work. 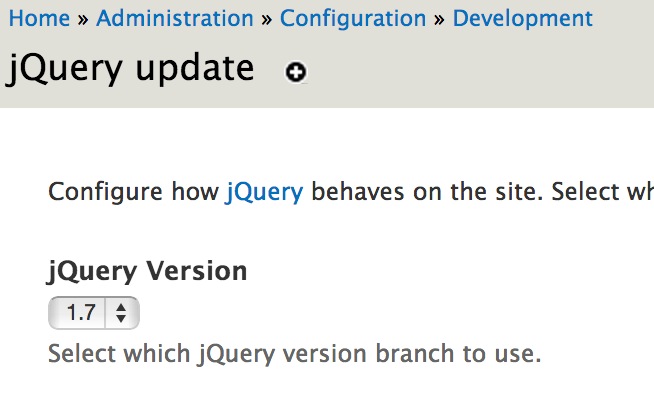 The quickest way to use a Bootswatch theme is to use the BootstrapCDN. The CDN hosts Bootstrap as well as Bootswatch. Instead of having to download and store a copy of Bootstrap locally, you can use the CDN to host the CSS.

The theme for Drupal offers a configuration option where you can select which Bootswatch style you want to use. This is great for testing out different styles, but it’s not flexible if you want to modify the theme.

To use the CDN, create a sub-theme, and then go to Appearance and click on the Settings link for your theme.

In the “Bootstrap Settings” area, click on Advanced and then “BootstrapCDN”. 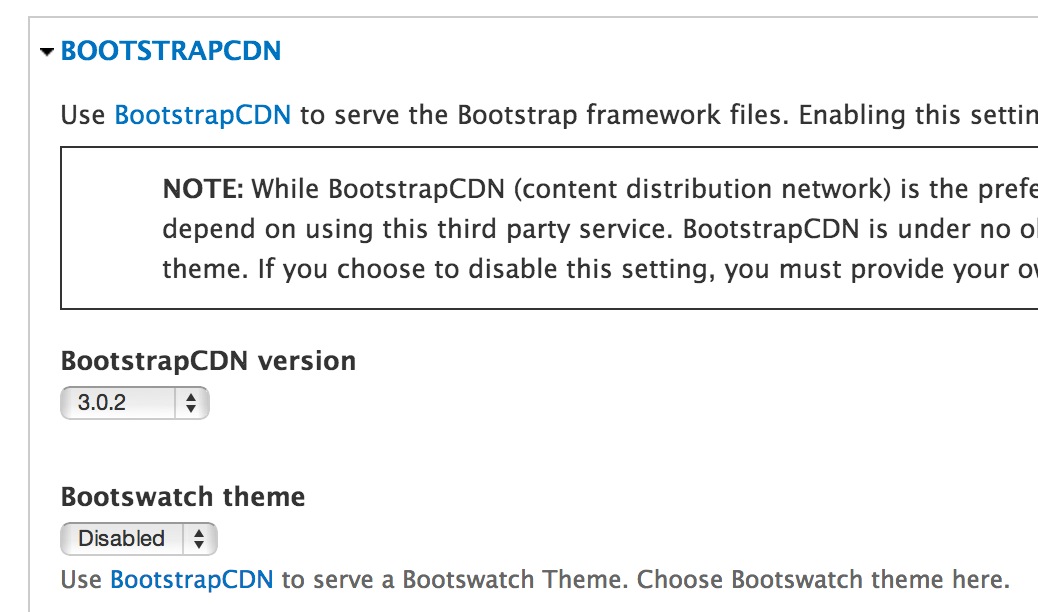 Select a version of Bootstrap and a Bootswatch theme. Then click on “Save configuration”. 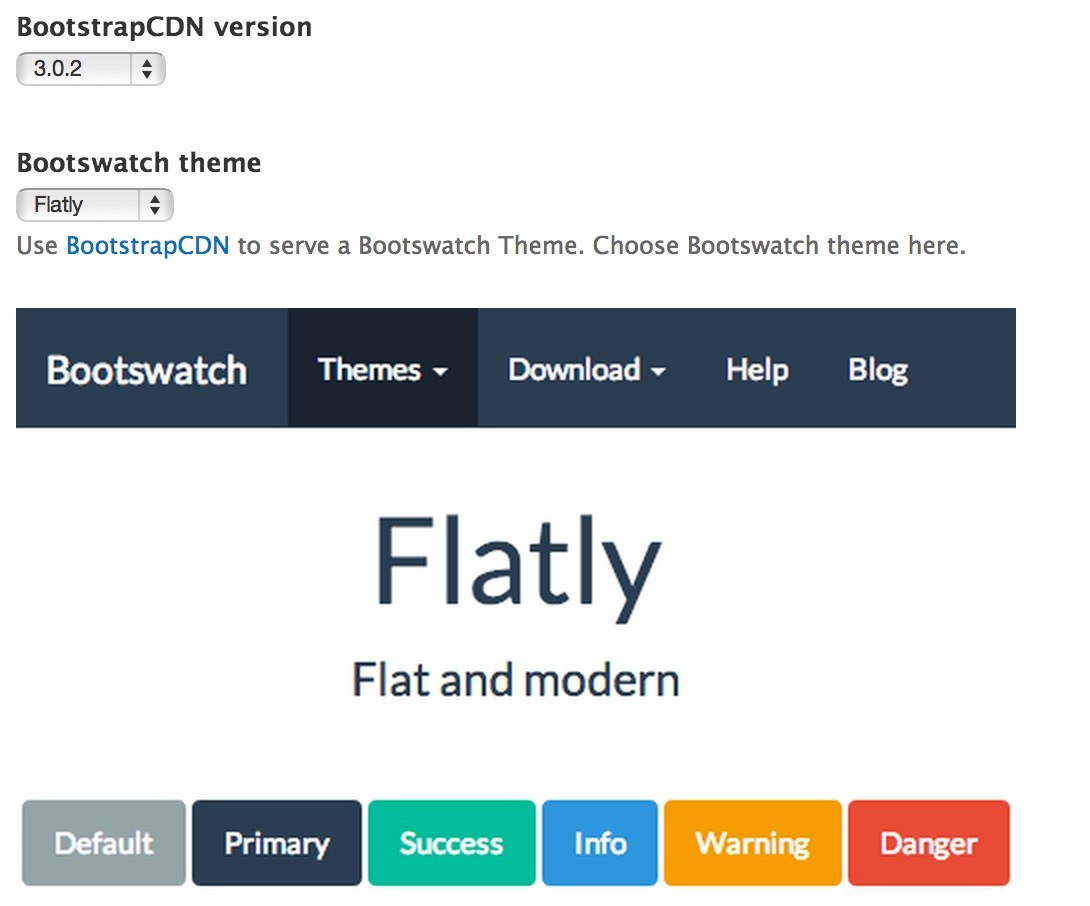 If you go to your homepage, you should see a new look and feel.

The second method I want to demonstrate is compiling the LESS files yourself, and creating a customised version of bootstrap.css.

If you want to customise Bootstrap properly, then this is the way to go. From within variables.less you can modify a lot of stuff like colours, borders and even the grid.

Of course, this method requires more work but it’s worth it.

The first important step is to install lessc to compile LESS locally. It can be compiled in a few ways, but I’ve found that using the npm version to be the most stable. I’ve heard of users having trouble compiling LESS using lessphp for example.

Go ahead and run npm install -g less to install it.

Go into the Bootstrap theme that you downloaded earlier and make a copy of the bootstrap_subtheme folder and place it in sites/all/themes. 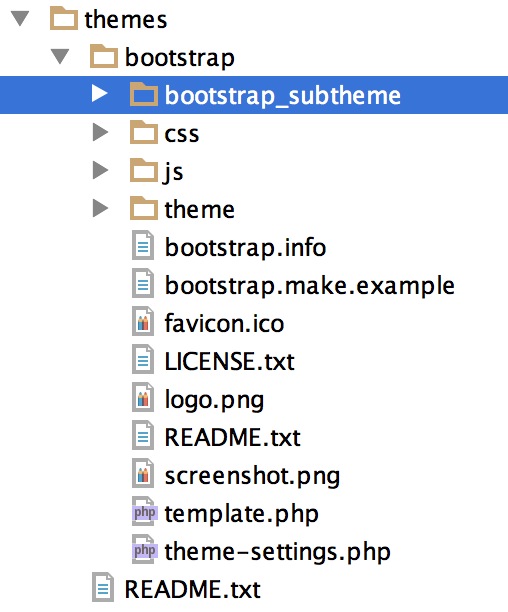 Rename the folder and call the theme whatever you like and make sure you rename the info file the same.

Once complete you should have a new bootstrap sub-theme. 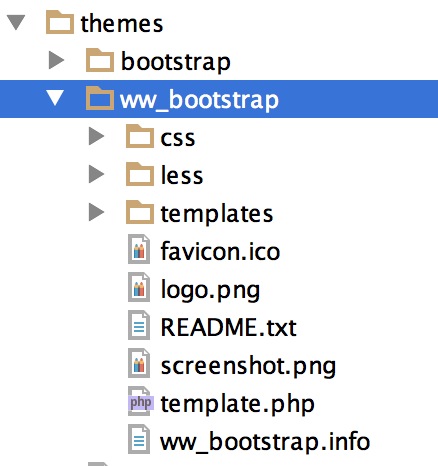 Check out the Bootstrap sub-theming documentation page on drupal.org for more details about sub-theming.

Download a copy of Bootstrap 3.1.0 and place the extracted folder in your sub-theme. Make sure that the folder name is bootstrap, rename it if you have to. 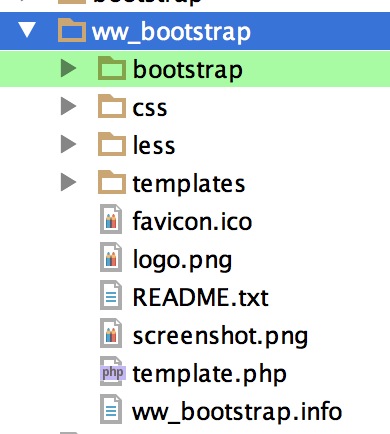 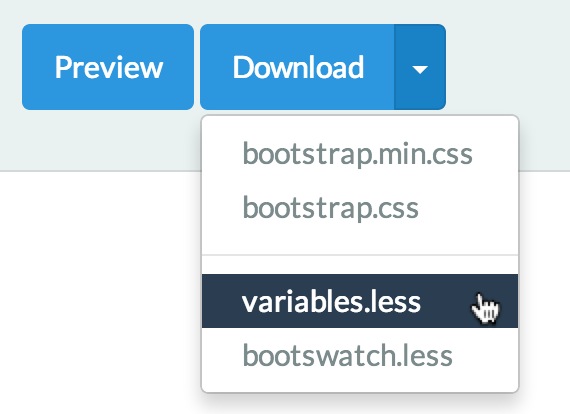 Replace the variables.less that is already in the less directory in your sub-theme with the one you’ve downloaded. Then, place the bootswatch.less into the same directory. 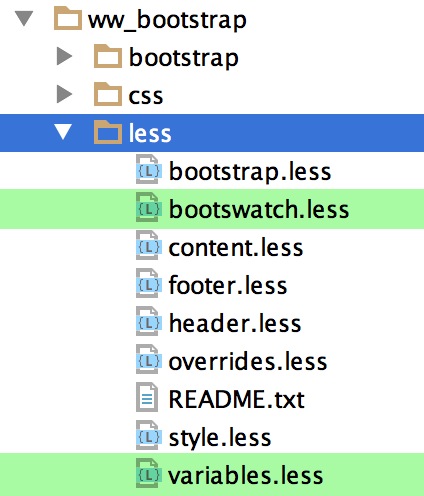 We need to make a single change to the variables.less for it to work with our sub-theme. Open it up and search for the @icon-font-path variable. Change the value from ../fonts/ to ../bootstrap/fonts/.

The job of the style.less is to import all other files. The compiled version of less/style.less should be saved into css/style.css.

Open up your command line or terminal and cd into your sub-theme.

Once there, run the following command:

This command simply tells LESS to compile less/style.less and save the compiled version into css/style.css. Once compiled, open style.css, and you should see thousands of lines of CSS code.

Open the info file in your sub-theme and make sure stylesheets[all][] = css/style.css is there and NOT commented out. Also, disable the BootstrapCDN by uncommenting settings[bootstrap_cdn] = ''.

Once you’ve made your changes, save the file and don’t forget to flush the site cache.

Now click on Appearance in the administration toolbar and enable your sub-theme. Then head over to the homepage and you should see your new bootswatch theme. 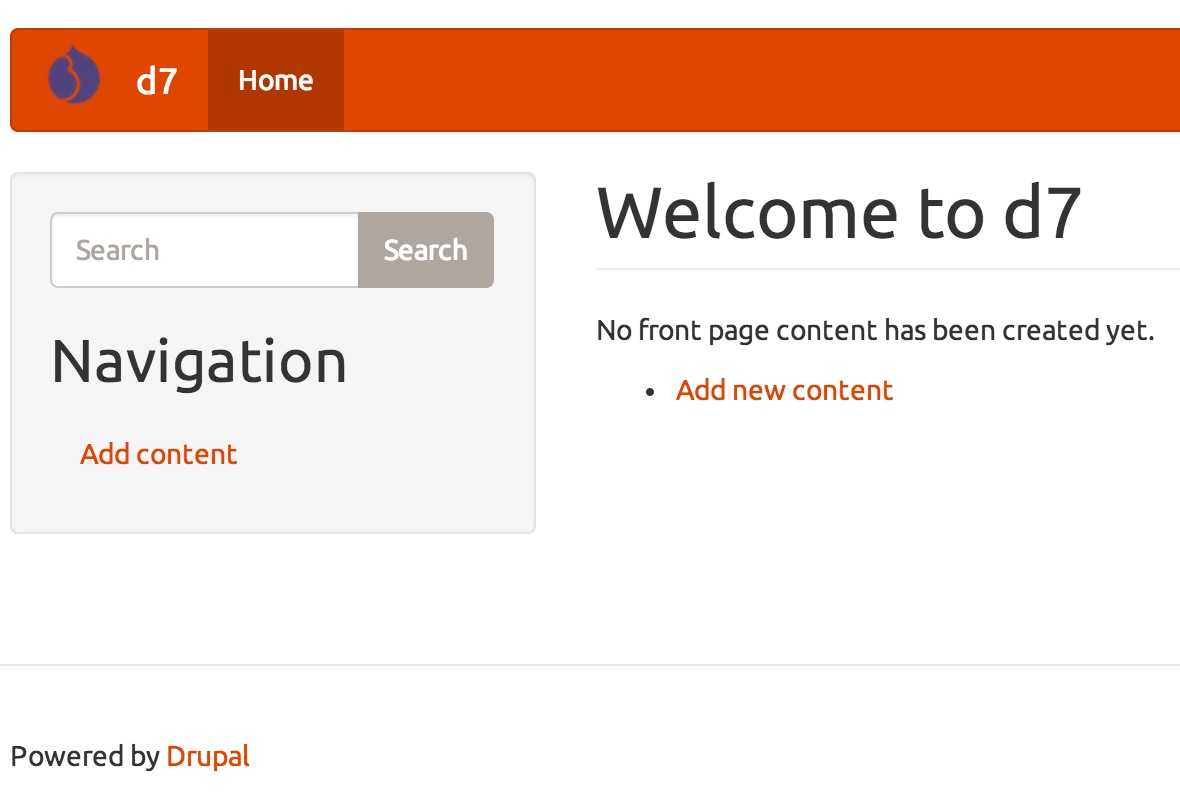 As mentioned earlier, if you’re going to make drastic changes to the theme then compile your own version of Bootstrap. I understand that you can override CSS properties, but you have much more flexibility when you modify the LESS files directly.

If you want to use the latest version of Bootstrap. Download and store it in your sub-theme.

Q: I made changes to my sub-theme info file and nothing has changed.

Flush the site cache whenever you change something in the info file.

Q: None of the jQuery plugins are working when I use method 2.

You have to manually select which plugins you want to use by uncommenting them from the Scripts section in the info file. 21 thoughts on “How to Use Bootswatch Themes in Drupal 7”